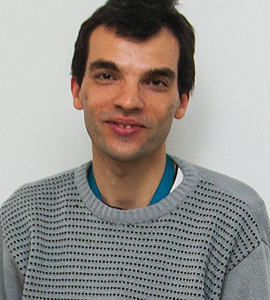 Towering above the rest from the dizzying 2.08 m, Radi looks upon the world amiably and benignly.

Nothing escapes his notice, even the smallest detail, which others hurrying along often let slip by unnoticed. Radi dreams of visiting Paris and seeing the Eiffel Tower. He loves playing computer games with trucks that travel Europe far and wide. He says he would be happy to work in a rural farm, because he loves animals. He has a kitty that has actually grown into a rather big cat, which loves napping in his arms.

Everyone at the Day Care Centre wants to pair up with Radi and have him on their team – he has a quick mind, which easily remembers the task at hand, and is generally considered a dream partner, curbing insecurities or intervening before haste makes waste.

He actively works at the Kitchen Atelier of the Daycare Centre.

Radi is yet another client of the Worlds Daycare Centre to successfully work in the real world. He is now part of the kitchen staff of Daro – a popular restaurant in Sofia.