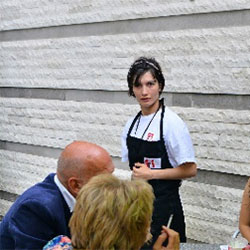 Nadya lives in a Safe House run by the Star of Hope Foundation, where she fondly cooks delicious meals for her roommate and herself. Nadya maintains her nice little place in pristine cleanness and decorates it with textiles embroidered by herself. If she fails at something new to her, she would make a joke out of it rather than fall in despair. She does not shy away from asking about things she cannot come to grips with.

In the matter of a few days she became one of the most-sought people to talk and team up with at the Day Centre. Both boys and girls can count on her smile and support. Even though she grew up without parents, Nadezhda (which in Bulgarian means "Hope") can give hope and support to everyone.

In May 2015 the event management company Event Design hired Nadya as a technical assistant with the support of MWF's Supported Employment Programme. She helps with the various office activities. Nadya makes coffee, wipes and tidies the desks, cleans the office premises and supports the team as they prepare and deliver events.